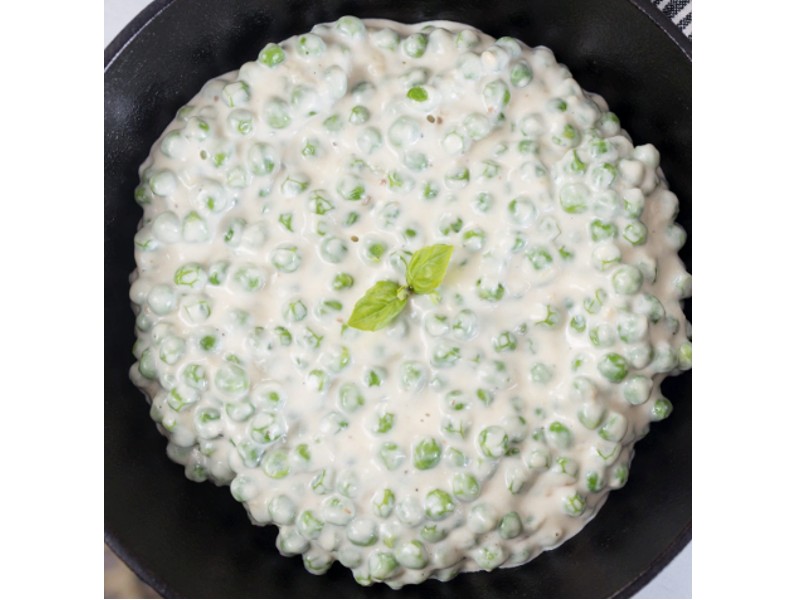 Whenever I come across a recipe that doesn’t have much of a story. I’m a bit judgmental about it (I know, it’s not such a good habit, but I’m working on it).

I always look for something more than just taste in my food. So today I thought let’s change that, make something new. So, this me trying new things with this Creamed Peas recipe.

Why this Creamed Peas Recipe?

There wasn’t any specific reason for choosing this recipe, apart from the reason that I was really craving a simple vegetable dish today and I  hadn’t tried any “pea” recipe in a while. Plus this was the best creamed peas recipe I could find.

I’ve always known that cooking isn’t as simple as it seems. It’s not just making drinks or throwing things together for food. It’s a LOT more than that, it’s a story that you create every time you turn that stove on.

Perhaps, in chasing those stories I forgot to see the very basic truth about cooking. Yes, it’s about making stories and passing them on. But it’s also about enjoying the little things, savoring each moment, being happy.

I thought of making something that was simple and quick and of course  “tasty”. This fresh creamed peas recipe was simple, quick, and tasty. So  I tried it and I loved every moment of it.

I have a history with peas!

Yes, yes I know. I just said that this Creamed Peas recipe is not about history and now, two minutes later, I’m talking about history.

Well, that’s not the case as you will see in a minute. (I stand by what I  said, it’s not about actual history. So don’t run away).

So our story begins when a relative of mine moved into her new apartment. That weekend, me and my cousins divided to go over to her new place. She thought it was to help her out with the stuff but actually. There was a much greater reason behind it.

We all were there to prank her (it was revenge, ok she pranked us all the time). So there were these gifts she got for moving into her apartment. She was busy with the moving so she hadn’t opened them yet. That night we made her open those gifts.

The first one was a vase. The second was some familiar spoons. She got suspicious at that one. The next gifts were all stuff from her own kitchen. Spoons, plates, glasses, her blender, and even fruits and vegetables.

Actually the whole day we were very sneakily swapping the gifts, it was hard work but it paid off. Oh, the look on her face when she saw her blender.

Where do the peas come in all this? Well, the last gift she opened was the one I gave her and guess what I put in it. Yeah, peas. It would’ve been really funny but the tape on the box got loose and soon the peas were all over the living room.

We had to clean it all up as she opened the real presents. Yeah, it was fun while it lasted.

See also  How to make donuts at home from scratch

What else can we offer?

Much, in fact. If you liked this Creamed Peas recipe with canned peas then we have some more side dishes that you will love like :

Hope you enjoy our easy creamed peas recipe and find joy in cooking.